SMH… This is how you know the kids are young and haven’t stopped them from being publicly embarrassing yet. 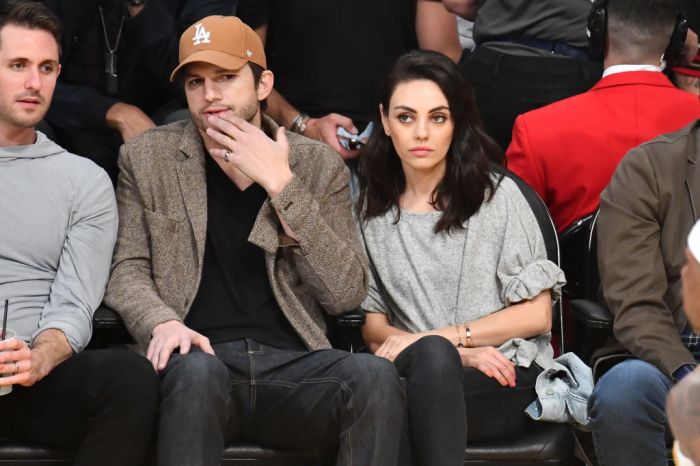 Ashton Kutcher and Mila Kunis were guests on this week’s episode of Armchair Expert podcast, hosted by Dax Shepard and Monica Padman. They were supposed to be there discussing cryptocurrency and NFT’s but early in the episode the conversation turned into one about how frequently they shower.

Shepard, 46, was basically saying he doesn’t always use soap in the shower, because he doesn’t want to get rid of the natural oils on his skin, so he only washes with water. To Padman’s surprise, Mila and Ashton agreed. In fact, Ashton is among the folks who rely on what sounds pretty much like a “ho bath”.

“I wash my armpits and my crotch daily, and nothing else ever,” Kutcher said. “I got a bar of Lever 2000 that delivers every time. Nothing else.”

Fortunately both he and Kunis do wash their faces daily.

“I do have a tendency to throw some water on my face after a workout to get all the salts out,” Kutcher added, while Kunis offered, “I do wash my face twice a day.”

“I can’t believe I am in the minority here of washing my whole body in the shower. Who taught you to not wash?” Padman asked.

“I didn’t have hot water growing up as a child, so I didn’t shower much anyway.”

Kunis, 37, continued by sharing that she continued those habits after having kids by not washing them every day.

“I wasn’t that parent that bathed my newborns — ever,” Kunis shared.

Shepard, who is married to actress Kristen Bell, was in agreement. Sharing that the couple used to bathe their daughters Lincoln, 8, and Delta, 6, nightly as part of their routine, but stopped after the kids got older.

“That’s how we feel about our children,” Mila Kunis agreed. She and Kutcher are parents to a daughter Wyatt Isabelle, 6, and a son Dimitri Portwood, 4, who they revealed only get lathered in soap when the filth becomes visible.

“Now, here’s the thing,” Kutcher added… “If you can see the dirt on them, clean them. Otherwise, there’s no point.”

Y’all! We know babies have sensitive skin, but they do make gentle body washes for kids. Do you think Kutcher and Kunis are in the norm for parents of young children? Is this a cultural difference? What do you think is the appropriate frequency for bathing kids? How about soap, what’s the best kind for children? And what do you think about the adults saying they only hit the hot spots with soap on the daily? Is this poor hygiene? Or does Dax have a point about leaving our natural oils in place?