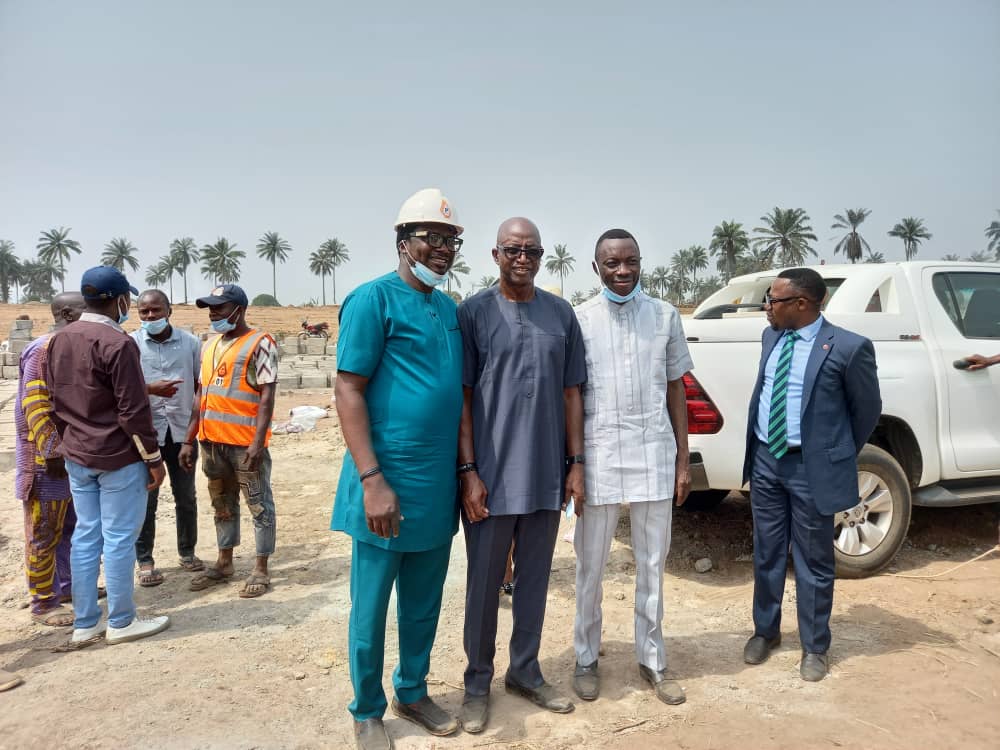 It is most unlikely that many would be familiar with the name of a town called Ileogbo. I never heard about it until a few months ago, when I was appointed as a consultant to work on a project sited in Ileogbo in Osun State.

Two weeks ago, a seed was planted in the little-known rural township, comfortably and serenely nestled half-way between Iwo and Oshogbo, in Osun State.

I was in Ileogbo to witness a dream become reality.

Igali Assures ‘Adequate’ Preparation for Team Nigeria Ahead of Qualifiers

My visit was meant to be for the purpose of a meeting, but it turned out to be a big pleasant surprise.

The invitation to go to Osun State had to be honoured. One month before, I had been made a consultant on a project. I was very excited because when we laid the foundation stone of a similar project, the first in Nigeria, in the little hamlet of Wasimi Orile in Ogun State, some 17 years ago, my hope was that sports stakeholders would take whatever happened with the Segun Odegbami International College and Sports Academy (SOCA) as a test of the feasibility and possibility of such an institution, take useful lessons from my own experiment, avoid the mistakes I make, embrace the successes I record, and establish many more of such a model around the country in order to fast track the development of the youth population that is crazy about taking up the vast opportunities that professional sports in several parts of the world offer the most gifted young boys and girls. My intention was that SOCA would be a model.

It has been 17 years since the turning of the sod of SOCA in Wasimi Orile, and the laying of the foundation by Otunba Gbenga Daniel, the governor of Ogun State at the time.

It took a little while but since then, at least 4 other such institutionalised academies, all of them for young footballers only, have sprung up in Abuja, Owerri, and Orile Imo in Ogun State, have been established and are running well.

Yet, this number is but a drop in a country with 60 percent of its 200 million people as youths in a world of boundless opportunities in the sports industry.

From the introductory brief I got, this particular academy is envisioned to top all existing similar institutions in the country. The vision is to establish, potentially, the biggest and best grassroots sports development institution in Africa. I was excited about the prospect. I needed to see and hear, first hand, from the horses’ mouth how this would be achieved.

So, I broke my ‘hibernation’ and embarked on my first travel outside Ogun and Lagos States in a long time. For obvious reasons of the Coronavirus pandemic, and because I belong to the vulnerable age-group, I had been confined to the ‘bubble’ of my homes, my workplaces and the SOCA, all in the short hops between Lagos, Abeokuta and Wasimi Orile.

Weeks ago, I traveled to Osun State to witness and be a part of history. I am very glad that I did. It turned out to be a fantastic experience worth all the ‘trouble’ to convince my family to let me go outside our ‘bubble’.

This is a brief at the Sports Academy.

It will combine sports and education. It will be co-educational (for boys and girls). It will be fully residential (the students will all live on the campus). It will promote more than football which would remain its main catchment area. There will be track and field athletics, tennis and golf. It will run at a senior secondary school level only, to start with, and shall use the junior secondary schools around the country to identify young gifted and passionate children that fit the profile of those that can be admitted to the school and become the best in the world.

Down the line, beyond secondary school education, the academy will also introduce education classes and entrepreneurship courses that will empower the student/athletes with higher education and specific fit-for-industry programs.

At the end of the programmes, the graduates can then embark on either even further education or proceed directly to careers in professional sports, depending on the level of their sports talent and development.
Either way, the graduates would have been well equipped for life with the training they would have received in the Sports Academy.

The brief was sweet music to my ears. I only needed to add my experiences in running a similar project, fit it snuggly into the expectations of the brief, and guarantee its success.

To demonstrate the seriousness of thè project, Engineer Lanre Adeleke, an enigmatic entrepreneur, whose construction works in different parts of the country are amazing success stories, invited me to Osun State to witness the take-off of the ‘plane’ of implementation already revving on the tarmac.

He tells me the institution must take off in 9 months time, in September 2021, yet the foundation stone had not been laid by the time I entered Oshogbo to catch up with him. His further projection is that the institution will be fully completed in 2 years!

The time table is breathless.

Construction work has started on the huge site with cranes and caterpillars strewn all over the vast virgin area in Ileogbo, some 200 acres of land that will house an 18-hole golf course, a helipad, a hotel and golf academy section, a sprawling school campus of classroom blocks, sports fields, and tartan and laterite tracks, boarding facilities, a mini 6000-capacity stadium and other service and recreational facilities.

I am dazed. SOCA is 17 years old since the foundation stone was laid, and we are nowhere near (not even halfway) completing all the infrastructure to run a world-class academy.

With Engineer Adeleke, his antecedents in infrastructural construction speak volumes. In all the States where he has projects, adopting a unique, funding strategy that diminishes the burden of paying for the projects off State governments, and delivers every project either on time or well before, he has established a reputation for surpassing expectations.

When I arrived Oshogbo on the first day of my two-day visit, he was waiting and roaring to go. We met with his key staff and other consultants on the project. He then led our delegation to meet with the governor of Osun State, Gboyega Oyetola, in his residence, that evening.

The very unassuming and amiable governor, whom I had known for some years, welcomed us warmly and brightly. Incidentally, the governor and I have always had a mutual liking for each other. I believe he knows I respect and like him a great deal. His calmness, soft voice and very humble disposition are disarming.

Before I knew what was going on, I was called upon and thrown into the deep end of explaining the full scope and benefits of such an academy to Osun State.

Of course, all the evidence of the project’s efficacy is ‘daylight’ in the model in Wasimi Orile, and the whole world can go there and have their own taste of ‘paradise’ for the youths.

With the commitment of Lanre Adeleke and the political will of support that I saw of the Osun State governor, achieving the dream of making Osun State the new Mecca of grassroots sports development, empowering the youths of the State with education and fulfilling their passion for sports, building a community of youngsters that will be some of the best in the world of sports and scholarship through the Sports Academy, I can feel the air of a resounding success blowing in the wind.

Lanre wants to make the academy the biggest and best on the continent. That is his commitment – to deliver it.

The government’s commitment is to ensure that there is good access to the vicinity of the school, that there is an electricity supply to the area, that public water supply gets to the environment and that a specific number of the State’s children are sponsored there annually.

After paying a visit to the Oba of Ileogbo in his Palace, the entire entourage drove to the huge construction site where the first foundation stone was to be laid. That’s when the surprise of the day was sprung on me.

Unknown to me, the honour of undertaking that historic first step had been ceded to me.
That’s how, mask-in-face, in accordance to coronavirus protocols, in swirling dry dust of Harmattan in the month of January, I stepped into a dug shallow trench, a bricklayer’s trowel in hand, laid down the first brick of the Classroom block and said a short prayer committing the project and its successful completion to the Creator of the Universe. The resounding chorus of ‘Amen’ marked the start of a very exciting journey that will unfold in the coming months in Ileogbo, the little Town that will soon because a household name in the world of sports.

Like a jigsaw puzzle, daily since then, small pieces are being added.

In September 2021, the academy will take off with its first set of young boys and girls that will be admitted in the coming months to pioneer this dream project.

My advise to parents that have children, gifted in sports and passionate about pursuing sport within an academic or vocational institution that will provide a solid ground upon which their future can be built, is that they should watch out for more information on the processes for admission.

From what I saw two weeks ago, from what I heard from the horses’ mouth, and knowing the antecedents of the drivers of this vision, a very healthy grassroots sports development institution, called the Lanreleke Sports Academy, will birth a healthy baby in September 2021.

Igali Assures ‘Adequate’ Preparation for Team Nigeria Ahead of Qualifiers

NLO Pre-season: Experience Does It As Vet Rovers And FC Solid Battle For Supremacy In The Finals

No Intention To Host 2021 AfroBasket- NBBF

Tom Dele-Bashiru and Isaac Success close to return from Injury

6 Most Anticipated Video Game Releases of 2021

BBNaija star, Alex Asogwa calls out a Nigerian man who left an unflattering comment about her mum