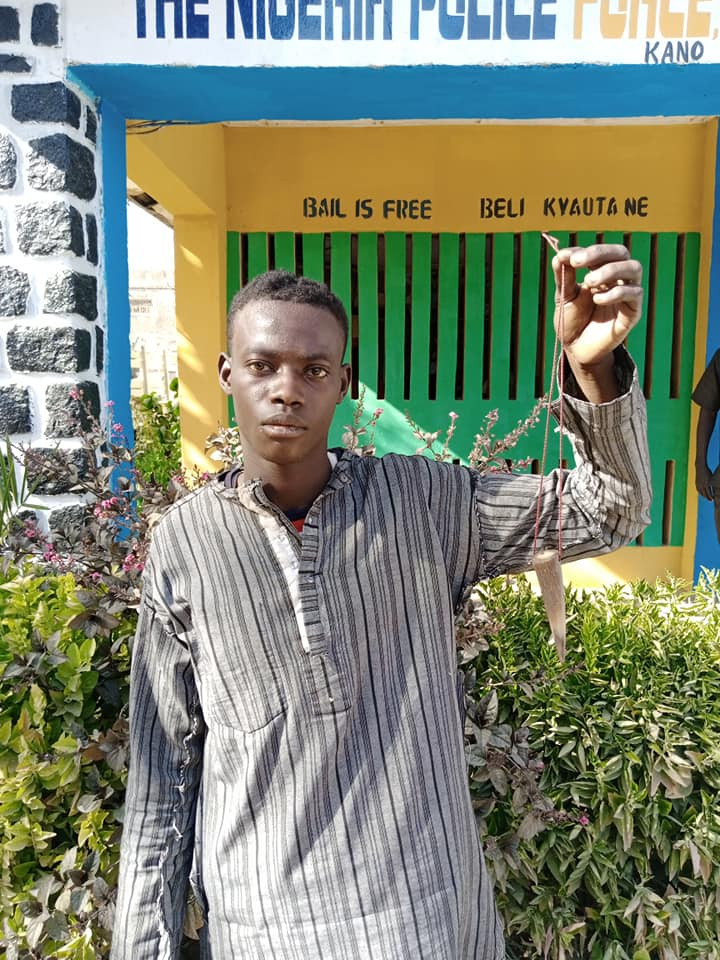 Dini Abdullahi, a robbery suspect, a criminal suspect has been a confession.

Abdullahi who was arrested in Kano for attempted culpable homicide has claimed that he is addicted to intoxicating drugs.

Spokesman of the State Police Command, DSP Abdulahi Haruna, in a statement on Tuesday, January 12, said the suspect stabbed a 22-year-old man with a sharp animal horn, took his N200 and fled to an unknown place.

“On 04/01/2021, at about 1100hrs, one Hajiya Rabi Umar of Galadanci Quarters, Gwale LGA of Kano State, reported that on the same day at about 0130hrs, one Dini Abdullahi, ‘m,’ of Gwale Quarters Kano, used sharp Animal Horn to stab her son, one Ahmad D. Ahmad, ‘m,’ 22 years old of the same address, on his chest, face and neck, and took away his N200 and fled to unknown place,” Haruna said.

“The victim was rushed to Murtala Mohammed Specialist Hospital, Kano for treatment. The Command’s Commissioner of Police CP Habu A. Sani raised and instructed a team of Operation Puff-Adder, led by SP Nasiru Gusau, to arrest the culprit,”

“The team immediately swung into action and arrested the suspect, one Dini Abdullahi, ‘m,’ 20 years old of Gwale Quarters. The suspect confessed to have committed the crime, disclosing he is an addict of intoxicating drugs, such as Indian Hemp and Diazepam Tabs. Suspect will be charged to court after completion of investigation.” he added.

Kamala Harris Sworn In As US Vice President

Biden Arrives At US Capitol For Inauguration As 46th President