Pedro Okwudili Nwankwo, the chairman of Awgu Local Government Area of Enugu State, has attracted lots of backlash after he put up a huge billboard to mourn victims of last month tragic school bus crash.

”I Have Been Sleeping With My Father In-Law, Now Am Pregnant And Don’t Know Who Owns It” -Lady Cries Out (Audio)

Recall that eight pupils of Presentation Nursery and Primary school were crushed to death in an auto crash in Awgu, on October 28. A teacher and the driver were also killed in the tragic accident.

The billboard features a photo of the LG boss with a huge smile on his face beside that of Enugu State Governor, Ifeanyi Ugwuanyi.

Sen. Chijinkem Ugwuanyi, who posted a photo of the billboad on Thursday, November 26, has called on the LG chairman to immediately remove it.

”If you know this local government chairman from Awgu Local Government council in Enugu west called Hon.Pedro Okwudili Nwankwo, pls tell him to remove this immediately” he wrote

Meanwhile, reactions has trailed the appearance of the billboad, with many describing it as insensitive.

One Marcellus Ejiofor Nnadi said that whoever put up the billboard deserves serious beating..

“This one weak me. A whole local govt chairman announcing his ignorance on billboard with total address down to his political identity” writes Odumegu.

“It is too bad to place this kind of billboard, smiling and claiming to be mourning.” Anthony Tansi wrote. 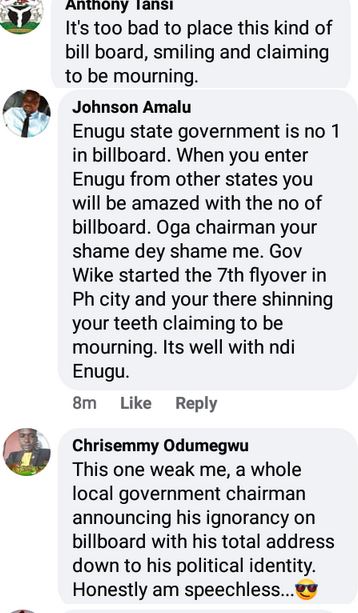 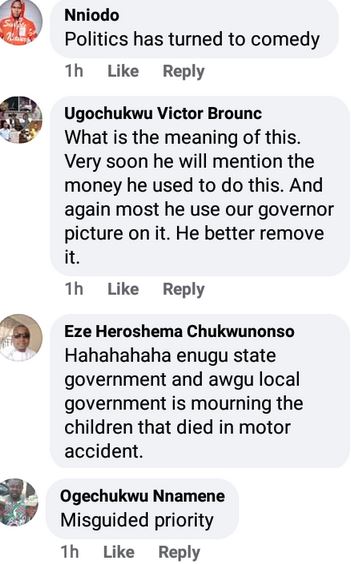 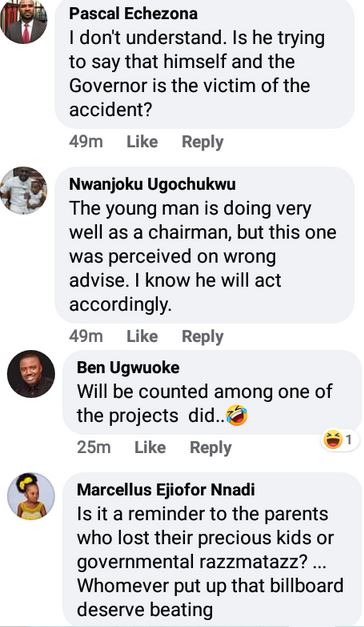 ”I Have Been Sleeping With My Father In-Law, Now Am Pregnant And Don’t Know Who Owns It” -Lady Cries Out (Audio)

Canada to support Nigeria with $10m to tackle insecurity

Erica’s Manager Is A Disgrace, Her Team Is A Big Mess -Laycon’s Fan Blast Erica’s Team After Calling Laycon A Manipulator

You’ll not have curse but have everlasting life if you accept Jesus – WWE Legend, Hulk Hogan reveals how he overcame hard times(Video)