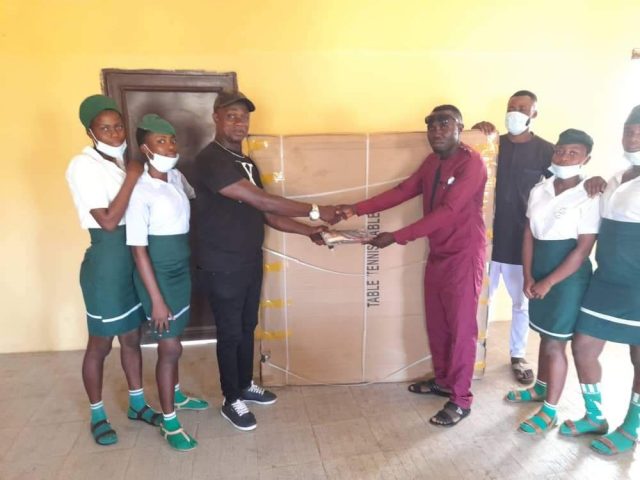 In line with the distribution of a set of Table Tennis and Accessories to schools that participated in the 28th Feb School Sports festivals, Methodist Girls Model Secondary School (ovim) isuikwuato LGA received theirs as well.

While other schools were represented by Principals, Headmaster/Mistress, and Sports Officer’s, the school came prepared with 8 eight neatly and well-dressed students led by Mr. Charles Iroha and Mr. Emeka Onwumere.

The Director of Sports Mr. Isaac O. Isaac handed the equipment to them as shown in the video because they came behind schedule.

Nigerian Forward Nominated For UEFA Fans’ Team Of The Year

The climax was a courtesy call to the Commissioner for youth and Sports Development, Hon. Chief Emeka Ikwuagwu received them and gave pieces of advice reminding them of the many youth-friendly projects of the administration.

The students who extended their sincere appreciation promised to make good use of the Table Tennis board to make the State and School proud in all competitions.

The Commissioner in his response also thanked the students for the visit as well congratulated them, tasking them to make good use of the Board so as to move Abia state sports to the next level.

The senior prefect of the school gave a vote of thanks.

Nigerian Forward Nominated For UEFA Fans’ Team Of The Year

Super Falcons forward and captain, Asisat Oshoala has been Nominated for the 2020 UEFA Fans’ Women’s Team Of the Year....

By Okechukwu Emmanuel The Flying Eagles of Nigeria today defeated Zaria Academy 3-0 in a friendly match played today in...

The Chairperson of the Nigeria Women Football League, Aisha Falode, Tuesday afternoon after the close of a second deadline for...

The recent impressive performances of the National Basketball team D’ Tigers is an indication that there would soon be a...

The Minister for youth and sports development, Sunday Dare has taken another impeccable step towards the growth and noble engagement...