BBNaija Star, Wathoni Given A Befitting Welcome In Kenya (Video) 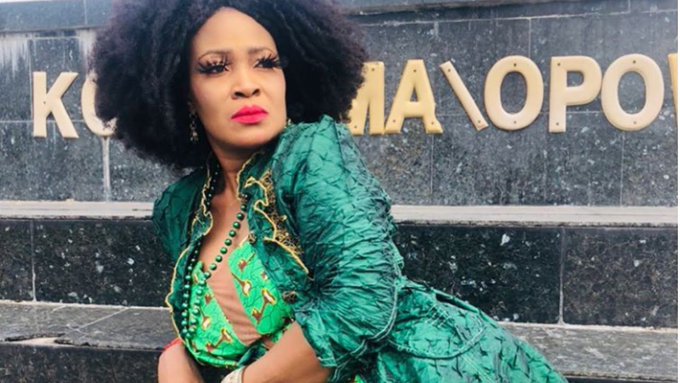 Muma Gee, a Nigerian singer-songwriter, says it was a “huge disgrace” that her marriage to Prince Eke, her ex-husband, failed.

In a chat with The Sun Nigeria, she spoke of her 2016 split from Eke, a Nollywood actor, who she had married in 2011.

Contrary to the allegations of infidelity which Eke was said to have cited as the reason for the split, the singer claimed her ex-husband woke up one morning and decided he was walking out of the marriage to her dismay.

“I have a deep understanding of my responsibility as a woman. I believe one of the duties I have to fulfill on earth is motherhood. And that includes getting married and building a family with a partner,” the mother of three said.

“In fact, where I come from, we do not believe in divorce or separation. Coupled with my Christian background, it was a huge disgrace that my marriage failed; but God in heaven knows I did my best and the fault wasn’t from me.

“If you have two partners and one wasn’t ready to settle down; and per adventure, you get involved and are willing to sacrifice everything to make sure the family works.

“But this partner just picks his bag and says, ‘I am done with this stage of my life, I am going kids or no kids!’ I never dreamed or imagined a situation where I, who has been so committed, was being treated so shabbily.

“I was so shocked I called it the 8th wonder of the world. The devastating part was to have built a career for years which I put on hold to kick-start something, and this person wakes up one day and says ‘I can’t go on with this’.

“Then I got the shocker of my life when I read in the news that I was frolicking with different men. That was the ultimate bullshit! Tony, you are an attractive man, and you knew me when I was younger.

“I have never drunk alcohol nor prostituted since I was born, and even as a single woman, I never messed around with men. I have always been a focused person, and then suddenly someone is saying all these lies against me?”

On whether she will remarry, Muma Gee said she’s now learning to forgive men and would give marital life another chance if approved by God.

“People say ‘never say never’ but the black dungeon that ex put me through made me go blank for men. For years, I lost it for men. It is difficult even though I am trying to revive myself; but you know what I say always,” she added.

“The grace of God is upon my life and I am learning again to see how I can give love a chance and how I can forgive men again. God will always direct my steps; and if He says I should remarry, I will remarry.

“If He says I’m not going to remarry, I am cool with that. Marriage for me was bondage; it is supposed to be a thing of joy, but I saw hell! In fact, as a tourist, the worst place I have ever been to was the London Dungeon.

“My marriage experience was worse than the London Dungeon, so just imagine me going back there. I am working on myself. I wish that I had a psychologist to work with. I see my kids growing everyday and they teach me a lot.”

BBNaija Star, Wathoni Given A Befitting Welcome In Kenya (Video)

Ex-housemate of BBNaija season 5, Wathoni was given a wonderful welcome at the airport when she journeyed back home. Recall...

Mavin Records Chief executive, Michael Collins Ajere popularly known as Don Jazzy has revealed that he is still not in...

The remains of Rev Tola Oyediran, the eldest child of late Western Region Premier, Chief Obafemi Awolowo, has been laid...

Togolese professional footballer Emmanuel Adebayor has accused ex-girlfriend Dillish Matthews of a number of things, including deception and cheating. The...