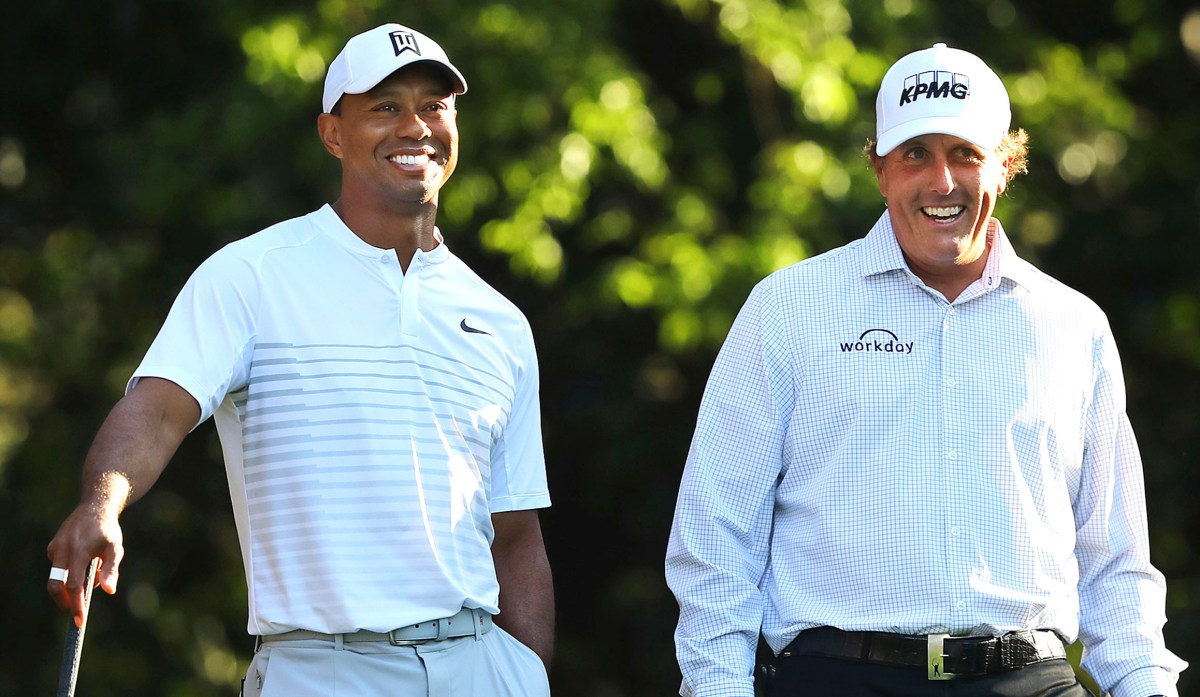 Two of golf’s biggest legends will be in the same group on Sunday at the ZOZO Championship which is always noteworthy, despite the fact that both are at the bottom of the leaderboard.

Tiger Woods and Phil Mickelson — who have been the two biggest names in the sport the page 25 years — will be teeing off with Adam Long at 2:28 p.m. Eastern at Sherwood Country Club in Thousand Oaks, Calif.

Woods and Mickelson, who are tied for 68th in the 77-player field, are at 3-under par 16 strokes behind leader Justin Thomas. Nevertheless, it’s likely the two long-time rivals will be looking to get the better of the other on Sunday.

This is the 38th time the two greats have been paired together in their career. With Sunday’s round, Mickelson will tie Ernie Els for the most of any player to be grouped with Woods. Unfortunately for golf fans, no spectators are at this event because of the coronavirus pandemic.

It will be the ninth time Woods and Mickelson play together in the final round on the PGA Tour, and the first time they have no bearing on the outcome. The first time they played together on a Sunday was at the 1997 PGA Championship when they were eight shots behind and each shot 75,

Woods, 44, won the ZOZO Championship in 2019 when it was held in Japan for his 82nd victory, tying legend Sam Snead for the most PGA Tour wins all-time. But a record 83rd win will have to await another time. Woods has won 15 major, trailing only Jack Nicklaus who has 18.

The 50-year-old Mickelson, who has captured five majors, has won 44 times on the PGA Tour. He also has won his first two events on the Champions Tour.

Two of the biggest modern-day stars will be battling for the title in the final group as Thomas, ranked No. 3 in the world, will be paired with No. 2 Jon Rahm, who trails by a stroke. Unheralded Lanto Griffin, who is two back, is also in the final group. The three will tee off at 2:50 p.m.

The coronavirus pandemic is pushing the number of people in need of humanitarian assistance to new highs, according to the...

A Hong Kong television station said on Tuesday about 100 staff were “affected” by a shake-up as it seeks to...

Getty ImagesPolice found a crossbow, machete, knives and Nazi symbols in early-morning raids on Tuesday after banning a far-right extremist...

The coronavirus has cast a pall over Christmas celebrations in Bethlehem, all but shutting down the biblical town revered as...

A bill requiring Iran’s government to step up uranium enrichment closer to the level needed for a nuclear weapon, and...

Pfizer Inc and BioNTech have applied to the European drugs regulator for conditional authorization of their COVID-19 vaccine, following similar...