by Global TimesNG
in News

Following the vandlization and looting of the Oba of Lagos on Wednesday, the significant Staff of the Monarch is now on auction on popular Classified Ads site at a cost of ten million naira.

Nigerians have taken to Twitter to react to this development.

Some are making sarcastic comments while others are talking about the traditional implications of the whole occurrence.

It also gets to the point many started to question the custodians of traditions on their genuineness.

“Why would someone touch the Staff and nothing happens, is it not meant to be sacred”, one said. 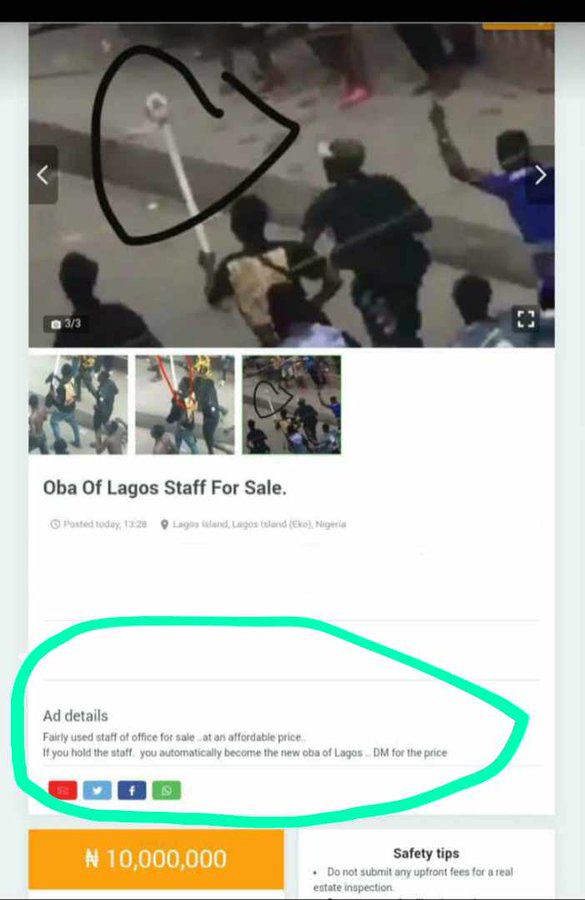 In a similar vein, the Akinshemoyin ruling house of Lagos Island has condemned, in strong terms, the looting of the traditional and ancestral heritage of Lagos State and the carting away of the staff of office of the Oba of Lagos, Oba Ridwan Akiolu by hoodlums who invaded the palace on Wednesday.

While describing as shocking and bitter the use of brute force on peace protesters by soldiers at the Lekki Toll gate on Tuesday, the ruling house, in a statement jointly signed by Prince Salami-Abisako and Prince Adeyemi Sarumi said it will not fold its arms and allow miscreants to destroy Lagos State.

“Though we are in total support of the peaceful protest of the Nigerian youths tagged: #EndSARS #EndPoliceBrutality, we, Lagosians condemn with all sense of responsibility the gruesome murder of Nigerians, the hijack of the peaceful protest by hoodlums, destruction of public infrastructural facilities and property across the nation.

“We also condemn the looting of our traditional and ancestral heritage as it relates to the Oba of Lagos Palace; especially the carting away of the staff of office. We will not allow miscreants to destroy our Lagos ‘Onilu Onije Otu’.

“The acts of these elements are sacrilegious, taboo and abomination to the Yoruba race. These nefarious misfits’ conducts could lead to mayhem in the land if not timely checked and tranquility restored.

“We hereby call on the paramount Apena of Oshugbo, Opa, Akala and other traditional heads and custodians to immediately secure the Oba’s palace from further attack(s) in order to save the face of our traditional stool.

“The royal house, however called for the return of the stolen staff of authority to be deposited at the Apena of Lagos within 24 hours or the deviants will face the consequences of their action. A word is enough for the wise.”

However, Nigerians are also reacting to this, telling them to check on Jiji if they are actually serious about retrieving the Staff.

2Baba is Angry: But ‘una no fit make me crase’

Nigerian man steps down as head of family, says wife will become breadwinner

Burna Boy Apologizes After Being Called An Hypocrite