It was a like Nollywood movie full of suspenses when a Nigerian man identified as Iberemu Osadebe stormed and disrupted an ongoing wedding in the Great Salvation Christian Centre, aka Father’s Church, on Ako Aro Road, in the Ifako-Ijaiye area of Lagos State

The visibly angry man, Osadebe affirmed that the bride identified as Gloria of the wedding he disrupted was his wife.

Global Times Nigeria gathered from Punch Metro that Osadebe had a traditional wedding with Gloria after they had a son together.

Osadebe became sick for about five years and reportedly sold most of his property to seek a cure.

According to report, the man who is an indigene of Imo state later travelled to his hometown in Isiala Mbano, where he continued the treatment.

Osadebe was on the sick bed when he recieved information that his wife of 20 years would be getting married to another man on Saturday, August 29, 2020.

Report revealed that the 43-year-old developed high blood pressure, which affected his speech.

Osadebe returned to Lagos on Friday which is a day to the wedding and reported his plan to disrupt the wedding at the Agbado Police Station.

Church leaders who recognised Osadebe begged him to let the matter go which he rejected after he arrived the church around 11am.

It was learnt that the new groom identified as Henry who is a transport worker and some members of the National Union of Road Transport Workers were also invited to mediate.

It was further learnt that the church adjusted the wedding programme after sensing the building tension and fervent prayers were offered against intruders and plots to interrupt the wedding.

According to PUNCH report, the church’s pastor was about to join the new couple when Osadebe’s family members marched to the pulpit and revealed that the woman was already married and could not be joined in holy wedlock.

It was also reported that security guards on the premises, however, bundled them out of the church, as pandemonium broke out in the assembly and later mounted a defence at the church’s entrance, while Osadebe and his family protested and demanded an end to the ceremony.

Speaking with PUNCH Metro, Osadebe amid stutters, said he was shocked that his wife betrayed him.

He said, “I was in a relationship with my wife for 20 years; we had a child together in 2011. My mother objected to our union because she is not from my tribe, but I said I loved her.

“When my mother died and I wanted to travel for the burial, my wife said she would not follow us, because it is a taboo in her tradition for a woman, whose bride price has not been paid, to go on such a journey. She also refused to release my son.

“When I got to the village, the elders were angry that I did not come with my wife and son as my mother’s first child. They fined me N40,000. After that disgrace, I vowed to pay her bride price.

“When I got to the village, the elders were angry that I did not come with my wife and son as my mother’s first child. They fined me N40,000. After that disgrace, I vowed to pay her bride price.

The former bus driver said when he took ill, he travelled to his hometown for treatment, adding that his wife refused to follow him.

He alleged that while he was sick, his wife called and lamented that she and their son were starving, adding that he instructed that his bus be sold and the proceeds given to Gloria to start a business and pay the son’s school fees.

Osadebe said he was shocked when his relatives called to inform him that his wife was remarrying.

He noted that though he still loved the woman, he had decided to let her go, but not without the release of his son and refund of the bride price.

Reacting to the incident, a family member of the husband identified as Richard Ikere disclosed that he was part of the delegation that paid Gloria’s bride price in her hometown in Uromi, Esan North-East area of Edo State.

Ikere alleged that Gloria started seeing the new man while her husband was still in Lagos.

“When I heard that she was getting remarried, I called my brother in the village and asked if he was aware. He said no, but that while he was receiving treatment in March 2020, someone brought a letter to him and he kept it.

“He said when he later checked, he found out that it was a divorce letter. How can a court dissolve a marriage without hearing from the man? That was when I asked him to come down to let people know that he is still her husband. And if she wants to leave, she should release his son to him.”

Ikere said Osadebe was blinded by love, saying his wife took advantage of his sickness to contract the new marriage.

“It was after he discovered that his wife wanted to remarry that he started to stammer. He was pained that a woman he loved so much betrayed him. It is unfair.  A man sold his land, vehicle and other property, and yet you’re not satisfied,” he added.

The wife of the church’s founder identified as Prophetess Ebube Evans said she knew both Gloria and Osadebe.

The prophetess added that the couple visited the church about two years ago while seeking a solution to the husband’s paralysis.

She said Gloria later told the church that her husband withdrew his membership because his health condition had improved.

Evans stated, “After a while, the woman complained to me that the man had started selling their property. We later discovered that the man was using her to beg for alms at Ogba bus stop. We observed that by 6pm, she dropped their son in church and returned around 11pm. She lied to passersby that she was stranded and needed money to return to her house in Ekiti. The money she made was what they were using to feed and survive.

“She later complained that the man used the little she made from the alms to drink alcohol and smoke at a joint.”

Evans said the church advised her to stop begging for alms, adding that her husband, however, became angry, sold all their property and left for the village.

She added, “For the period he was away, nobody asked after the woman or her child. We fed her and sent the boy to school.

“At a point, she became very ill and needed a surgery. The church raised money for the treatment.

“They were sent out of their house because the man owed two years’ rent; I gave her one room in my flat. Nobody gave us anything. Would you say the marriage was still on, when you didn’t value the woman and her child?

“The woman is an orphan. She was living with me when this young man (Henry) showed up and said he wanted to marry her. I was happy for her, knowing the church’s burden would reduce.”

The prophetess explained that when the remarriage came up, her husband demanded a formal divorce note.

She insisted that the court dissolved the union and Osadebe was served.

According to her, the church held the wedding because the court also ruled that the new couple could go on with their life.

“The woman suffered with him when he was completely incapacitated. Whenever he soiled his body, the woman cleaned him up and bore all the pains. None of his family members showed her love after he left. And now, they want to destroy her new marriage. Is that not wickedness?” she queried.

The purported divorce letter dated March 23, 2020 was obtained and it was discovered that the two-page document was a summons, as the couple were asked to appear before the Ojo Customary Court on April 1, 2020.

According to PUNCH Metro, the sitting could not hold due to the outbreak of Coronavirus.

Osadebe said he had yet to receive any other letter since then.

Gloria, according to the court papers, sought divorce on the grounds of “drunkenness and smoking, lack of care, stubbornness and no more love.”

She also claimed that her husband paid N25,000 for her bride price.

It was learnt that after the trouble caused by the husband in the church, the woman had not returned for service, as her telephone lines were switched off.

Efforts by our correspondent to reach her were unsuccessful, as her line was off. 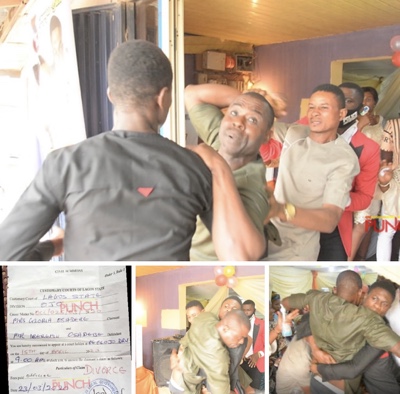 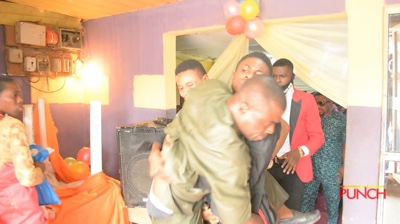 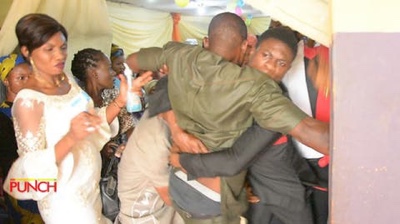 Osaze and Peter Okoye Nigerian musician, Peter Okoye has been accused of engaging in a fraudulent business. Peter was accused...

Spokesperson of the command Isah Gambo, confirmed the incident in a statement on Wednesday, December 2. A 25-year-old sex worker...

File photo It was serious tragedy that struck recently in Umueje village, Obinze community, in the Owerri Local Government Area...

The incident, which happened around 06 am, caused gridlock at Magboro, outward Lagos-Ibadan Expressway. Photo credit: The PUNCH In what...

“I Married Regina In 3 Weeks, She Knows I Will Marry Again” – Ned Nwoko Confesses In New Interview (Video)